From the start, the Robinson Family had strong ties to the coal mining industry.

Samuel B. Robinson was born of Scottish-Irish parents and educated in England. In 1863, Samuel immigrated to Monongahela, Pennsylvania to pursue his vocation in the coal mining industry. As a designer at the Pittsburgh Coal Company, Samuel devised many improvements in coal-handling equipment.

At age 12, Samuel’s son, J.R., began helping his father around the coal mine. Eight years later, J.R. was certified as a journeyman machinist and then entered Cornell University to study mechanical engineering. In 1892, Samuel and J.R. acquired a machine company in Monongahela and formed the Robinson Machine Company. J.R., acting as chief engineer, was incredibly versatile. Fans, steam boilers, engines, hoists, crushers and haulers were among the complete line of equipment he developed for coal mines and mills. His work laid the foundation for the future success of Robinson Fans, Inc.

The World at War

In 1917, the United States was fighting a “war to make the world safe for democracy” according to President Woodrow Wilson. And due to the manufacturing demands of World War I, every company was gearing up to do its part. The Robinson Ventilating Company found it necessary to establish its own manufacturing facility in Blairsville, Pennsylvania to maintain a smooth-running operation.

In 1921, the facilities were moved to Zelienople, Pennsylvania, where the Robinson home office and plant exist today. Lawrence and Mayes Robinson were instrumental in site selection and construction of the new plant. Just 30 miles north of Pittsburgh, Robinson’s engineers and salespeople have had opportunities to study the needs and problems of the air-movement field in one of the largest industrial areas in the world.

J.R. Robinson summarized his mine ventilation work in a technical journal in 1922. A testament to J.R.’s expertise in the field, the published work later became a college textbook titled Practical Mine Ventilation. His pioneer efforts in the ’30s with coal-drying and heat-treatment processes for the steel industry led Robinson to the development of high temperature fan equipment.

To ensure that the company would remain a family business with family values, J.R. set up the majority of stock in a trust fund for his children. Throughout his career, the founder remained extremely active in the development of mine ventilation and in the progress of his company.

In fact, many of J.R.’s children – Marny and Mayes, Roger and Lawrence – had a role in the growth and development of the Robinson Ventilating Company. Marny married J.L. Henderson Sr. in 1920. Their sons, James L. and William W., were instrumental in building the company from it’s humble origins into the internationally recognized fan manufacturer that Robinson is today. James L. Henderson worked for the company from 1949 until his death in 1995. William W. Henderson started with Robinson in 1952 and retired in 2006.

At the same time, methods were being developed for using air to dry crops, such as corn and hay. By utilizing controlled drying methods, farmers were able to increase the nutritional content of the dried crops while saving labor, reducing soil erosion and limiting waste associated with weather curing.

During the 1960s, Robinson Fans developed air-moving equipment for the fertilizer industry. The experience acquired in high-alloy technology in that field enabled the company to enter the pollution-control market in the 1970s.

Responding to a Growing Demand

In response to a growing demand for air-moving equipment in the fertilizer industry, Robinson Fans opened a second plant in Lakeland, Florida in 1976. The plant handles a considerable amount of fan repair and rebuilding in the South.

Robinson Ventilating Company became Robinson Fans, Inc. when it was incorporated in 1974 to better describe a commitment to the overall industrial market.

Robinson Fans had been servicing the fans of existing customers for decades, and during the 1970s, service was extended to rebuilding all fans, including those of competitors. Of the companies that offer this service, Robinson stands out with advanced design capabilities such as finite element analysis and diagnostic frequency analysis of fan system components.

The Robinson plants in Zelienople and Lakeland are equipped with the most modern fabricating facilities available.

The Zelienople plant has the technology to fabricate metals ranging from mild steel to some of the most exotic alloys known to man.

In addition, the Zelienople plant is equipped with modern quality assurance procedures, encompassing many forms of nondestructive testing and its own research and development laboratory. This lab is used to develop all standard and customized fan equipment, as well as to build and test scale furnace models.

Today, Robinson is one of the leading hi-temp fan manufacturers in the world.

The first 100 years were a time of tremendous growth and prosperity for Robinson Fans, in spite of some difficult times during the war years and economic cycles. In the 21st century, innovation driven by sound leadership will establish our place in an increasingly competitive global economy. 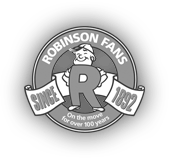 Over 125 Years of Quality

Well into our second century of doing business, our obsession with quality never grows old. Rather, it grows stronger. Today, each Robinson Fans facility operates under the requirements of the ISO 9001 Certified Quality Management System.

Please wait while the form loads